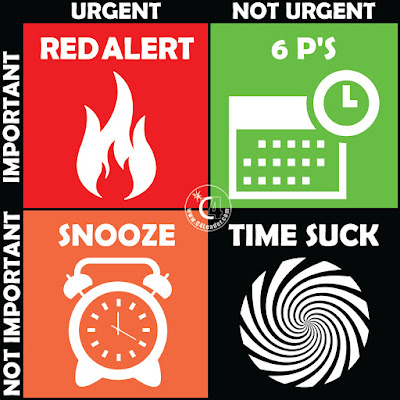 The X-Axis is defined by Urgent and Not Urgent. The Y-Axis by Important and Not Important. The basic definition for each is below:

Urgent:  The thought is that this needs to be addressed immediately. It typically has an indicator or requirement which is hard to ignore and begging for your attention NOW.

Not Urgent: There is no immediate time requirement for the task / activity. The activity could be performed at any time or not at all.

Important: If the task / activity is not addressed there will be significant consequences. You (or the people you are responsible for) will suffer in some manner if the activities are not accomplished or given proper diligence.

Not Important: If the task is ignored or delayed, then there will not be significant consequences. The Important work will continue regardless of whether these items are addressed, although in some cases if these are not addressed they may eventually become Important.


An Emergency on Your Part Does Not Constitute an Emergency on Mine.
paraphrased from an old proverb, I couldn't find an original source

Now, on to the Quadrants: 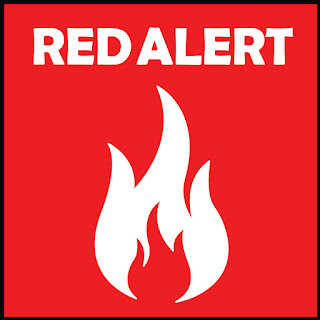 Welcome to where Leaders spend the majority of their time and where the majority of our stress comes from. These are the events that are Urgent and Important. In other words, these things cannot be ignored.

When I think of Red Alert, I tend to think of Star Trek where the Enterprise is in imminent danger (i.e. a Romulan Warbird decloaks in front of the vessel), and the wall panels turn red and a klaxon sounds. Everyone runs to "battle stations," the weapons are charged and the shields are up. Back in reality, these tend to be situations that need to be addressed immediately.

Severe instances could be a house on fire, a car accident, or (as some of us have experienced) getting shot at. Less severe instances would include a looming project deadline, a quality issue in a finished product for a project, or a mistake on a key piece of code or report required for government approval. These are all events which have the potential to significantly impact you and your team, and all need to be addressed immediately (right now!), before things get worse.

Sadly, this is the place where leaders tend to spend the most time because they don't spend enough time in Quadrant 2. 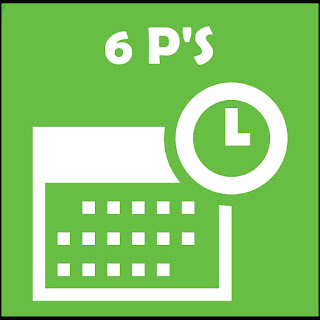 This is the Quadrant where we should be spending the majority of our time (leader or not), but the majority of people are too busy dealing with Quadrant 1 and 3 to give this one the respect it deserves. These are the events that are Not Urgent but Important. This is the Quadrant where you plan for the future, and conduct activities to prepare for the betterment of your team and yourself.

The 6Ps identified above is a less obscene version of the statement, which comes from the military. There are a wide variety of ways to say this, but they all amount to the same thing: Planning and Preparation. The original version has a minor expletive which I didn't share here because a Leader needs to decide what is appropriate for his / her audience and / or team (i.e. Culture / Language Diffuser from a  previous blog entry). If you want the full version, just type 6Ps in Google.

Planning future activities and identifying required resources, scheduling time to address conflicts and conversations, making time to learn more and grow your own skills, reaching out to friends and family to maintain relationships, researching for future projects, and even exercise all fall into this Quadrant. The honest answer is that if more people spent time in this Quadrant, then there would be less items happening in Quadrants 1 and 3, because you would plan and prepare for the difficulties before they happen, rather than dealing with them when they happen. Proactive rather than Reactive, with the added benefit of not only limiting the amount of time in Quadrants 1 and 3, but also likely reducing the severity of the events in those quadrants.

When working out the C4 Leader  concept, this is where Conceive takes place. As a leader you should plan out all the end states you envision and prepare to get there. If you don't plan, but you have a "goal" you want to achieve, all you're really doing is wishing. 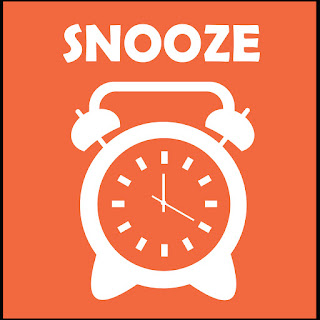 Say hello to the Quadrant of being busy without being productive! Events that are Urgent and Not Important. This Quadrant consists largely of the little distractions that eat up your day and yet aren't really important. This doesn't mean that they shouldn't be addressed, but in reality we should be handling these items in a couple of ways:

In the long run, this is the Quadrant that grabs attention away from the things you should be doing because it is shiny, loud, or annoying. However, it isn't as much of a time suck as Quadrant 4. 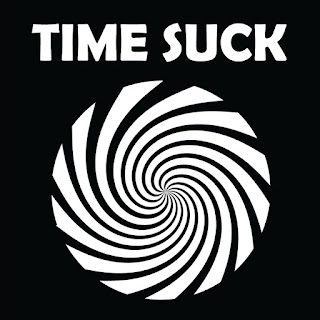 Welcome to the Time Suck! These are the activities that are Not Important and Not Urgent.  Video games, movies, television shows, junk mail / spam,  trivia, some reading, and generally speaking the things that are considered pleasant activities. These activities can be considered restorative, but needs to be closely monitored to ensure that it isn't taken to excess.

Human beings need downtime. We recharge our batteries sometimes by participating in Time Suck activities, however the problem is that these activities can quickly become a waste of time. We would rather reach another level in a video game than exercise or network with our friends, or we binge watch an entire season of our favorite show rather than work on the report that is due.

This Quadrant should be taken in moderation, because the time spent here (while most often enjoyable) is not productive. Small visits to the vortex are recommended, but avoid being sucked in for too long.

Now that we've explored the Decision Matrix. Let's take a look at how you should spend your time: 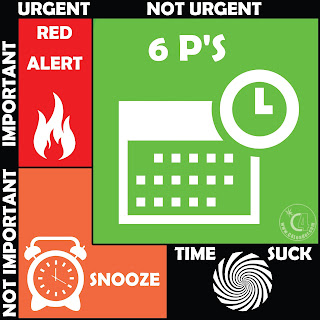 Hopefully, you realize that if you spend your time in Quadrant 2, less time will be spent in 1, 3 and 4. You will be able to address the Urgent items earlier (perhaps before they even become Urgent) and be prepared for the emergencies.

But if you are constantly buried in Quadrants 1 and 3, how do you get to Quadrant 2? Here is the difficult answer: Delegate Quadrant 3 as much as you can, ignore the rest of 3, and give Quadrant 1 the bare minimum, and make spending time in Quadrant 2 part of being in Quadrant 1. In other words, you have to make the time to be in Quadrant 2, and it needs to be a Red Alert situation. Otherwise other events will infringe on your time and you will not be able to spend your time where you should.

I know, easier said than done. However, I promise that the more time you spend in Quadrant 2, the less overwhelmed you will feel. You will gain back energy and happiness, because you are doing things that matter and not jumping from emergency to emergency so often. It is worth the effort!

I would love for my readers to share their experiences with the Quadrants. Do you know where you are spending your time? Do you have any recommendations for moving from Quadrants 1 and 3 to 2? I hope to see some interesting responses in the comments section. Now get going on the 6Ps!
Posted by Matt Morey, PMP, DTM at 8:30:00 AM