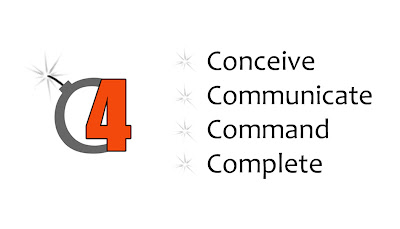 Now, what is C4? Well, many of you are probably familiar with 2C, or Command and Control, which is what most people think is the definition of military leadership. Unfortunately, that isn’t the whole story. When I was at Division Staff level, I learned about 4Cs of leadership: Command, Control, Communication, and Computers… Computers? Yes, I said Computers. It didn’t seem right to me (because computers is a tool) at the time, but I promptly forgot about it because I had other more pressing things to worry about (like a communication issue that left an entire forward operating base in a communications black out).

It wasn’t until several years later when I was going through old notebooks while on vacation that I came across it again. At this point, I was a little older, and hopefully a little wiser. I decided that the Army missed the mark. First, it shouldn’t be 4Cs. It should be C4, because that is better for branding, and easier to remember. On top of that, would anybody reading this argue that proper leadership can have explosive results? And, like C4, leadership needs to be molded to the situation in order to be most effective? It seemed a perfect fit.

But what of the 4Cs? Were any of them right? I decided to find my own Cs, and here they are:


CONCEIVE:
Now admittedly, my wife was pregnant with our second child when I came up with this word, but hear me out. I think it is perfect. Many  people would argue that leadership first starts with an idea. I would agree, but I don’t think that an idea is enough. There are thousands, even millions, of ideas out there that could be the foundation of leadership. What makes the idea different? When something is CONCEIVED it practically receives a spark of life. That is the difference between a leadership concept that is CONCEIVED rather than thought. That idea has a spark of life all its’ own and it can’t help but grow and adapt and develop. The first step of leadership is to conceive of the goals and end state you want your team to achieve (notice I said team, NOT YOU). It has to be more than a vague idea. It has to almost have a life all its’ own.


COMMUNICATE:
Stop and think about the best leader you’ve ever known, public or personal. Picture him or her in your mind. Think about how that person interacts with you and the team. Think about why he/she is a great leader. Got it?

Great, now let me ask this question, was that person at least a good communicator? I’ve been presenting for several years now, and I’ve never heard a “no.” That is very telling. In order to be a leader, you have to be able to communicate. You have to be able to not only CONCEIVE of an idea, but also COMMUNICATE it well enough for others to want to follow you. You have to be capable of making the tasks and objectives understood to your team. You need to be capable of providing clear guidance. And in the end, you should be capable of providing your thanks and appreciation.

If you can’t communicate, then you probably aren’t a leader. You’re just a man taking a walk.

COMMAND:
What do you know, the Army got 2 right! But why COMMAND? The word command brings images of a man in a uniform screaming at others to get moving, or to take a hill, or run across an open field. In general it is a negative connotation. So why choose it?

Because, a leader is responsible for what happens with his/her team. The leader should be in charge of his/her team. He/she should provide guidance, but also authority; whether the team is crossing an open field under machine gun fire or the team is filling out a monthly report. That is the burden of COMMAND, and I couldn’t think of another word that conveys the responsibility, burden and authority that COMMAND is capable of doing.


COMPLETE
My final C is probably the most overlooked. People tend to get to the end of a project, look at the schedule or scope and ensure that all the proper check boxes are ticked before moving on. However, they haven't finished building the bridge to success, the job/project isn’t COMPLETE. That is a decision that you are finished, but what about all the things that should happen after a project is finished. Final sorting and storage of pertinent documents, congratulating the team, celebrating the victory, and perhaps the most over looked: After Action Reviews and Lessons Learned. These are the things that are forgotten because the team is in such a rush to move on to the next project. They miss an opportunity to really learn from what they’ve accomplished, as well as savor the fruits of the labor (even in failure). To paraphrase Ferris Bueller (I know, I know, Matthew Broderick): “Life moves pretty fast, if you don’t stop and look around once in a while, you could miss it.” However, if you don’t do these things, if you don’t COMPLETE the project you aren’t finishing your job as a leader.

Now, please enjoy the blog, and hopefully we can start some conversations and all learn some more.