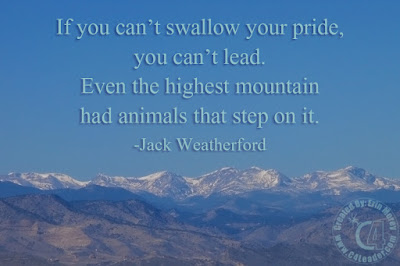 I love the mountains. There is something majestic about them, eternal. The snow covered peaks can appear desolate and devoid of life, but it seems that life always finds a way. Microscopic algae were found in 2013 14-17 miles above the earth surface, and moss / lichens have been found near Everest's peak, not counting the humans who have summited the very top of the Roof of the world.

With that in mind, no man should be so proud as to think that he / she is the greatest in the world. Something I tell myself often is "There is always someone better." The best today may not be in the future. Recently Tom Brady's name is floated as the Greatest Of All Time (GOAT) for quarterbacks. But not too long ago that name was Joe Montana, and before that perhaps Terry Bradshaw. GOATs are fleeting.

From a leadership perspective. pride can be a dangerous thing. Remember that the most effective forms of leadership tend to be based on service and sacrifice. What is best for the team, rather than for the self. Leaders who show a lot of pride can start believing their own hype and find themselves fast approaching a cliff. To paraphrase Proverbs: Pride goeth before the fall.