The world is full of incredibly brilliant people, whether we chose to see it or not. Some of the most incredible problem solvers I've ever seen are soldiers with limited resources. Stationed in Iraq, you would be amazed not only at what an 18-22 year old can scrounge, but also what they do with it. I watched:
Necessity really is the mother invention.

The problem is that over-time people seem to become less inventive, especially in locations of excess. There is no necessity so there is limited invention. In fact, in many of these environments, the invention is frowned upon, and sometimes even told "That's impossible." or "that's stupid." However, from dire moments of necessity I've learned Morey's Law#13:

If It's Stupid But Works It Isn't Stupid

Too often we put down ideas before fully exploring them, and when we do that we lose the ability to see some really inventive solutions. Have you ever watched one of those LifeHack videos? The whole thing is made of ingeniously simple things we all wish we had thought of on our own.

Beyond the ingenious,  they can be lifesaving. In the military I had a friend who was pinned down inside a building, taking fire from a position that they couldn't see. A soldier grabbed a broom put a helmet on it and stuck it in a window frame. When it was shot at his buddy, set back from the window, saw where the fire was coming from and called in artillery on the position. In fact, he isn't the only one to think of it because there is a pretty popular meme about it: 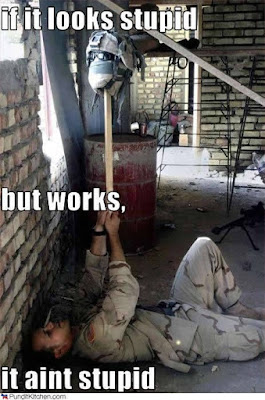 This works in corporate life as well, heck someone made money on the pet rock. At a slightly higher level I had an experience with an ERP project that was committed to using Standard Cost. They really thought it was the best way forward, because they manufacture products and a lot of the components are the same in multiple projects. The problem was that most of the projects are user configured, like building your own computer, and there were discounts and variances depending on the supplier and the end user. Because of this, there would be a lot of journal entries every year that needed to be adjusted in order to properly account for cost.

The simple solution was Actual Cost. Since most of the items were configured at the front end of the system, and costs rules could be set in the system to manager the discounts and variances, it would eliminate the need for journal entries at the end of the year. Significant savings. The idea met immediate resistance. They didn't want it.

Now to their credit, they didn't come right out and call it stupid, but we ran into the battle buddy of "It's stupid" and that's "We've always done it this way." They discounted the idea of Actual Cost because they were comfortable with Standard Cost and the process associated with the journal entries. They already had the staff for it, and the Finance Director came from a manufacturer who made the exact same widget 100,000 times a month.

Working with operations, and regional finance managers, we started to build a ground swell for change to Actual Cost. Business cases were created and presented, and eventually the Finance Director acknowledged the improvement.

The basic of this Law is to look for the simple solutions first. Don't discount suggestions out of hand, and just because you've always done something a particular way doesn't mean you should always do things a particular way. When you have a problem (as in so many of Morey's Laws) take a step back and think. What is the root cause of the problem? Is there a solution nearby? How long will it work? How long does it have to work?

As a final note I am amused that this is Law #13, because if not careful this Law can be really dangerous. Like this:

Granted this solution works, but it puts too much at risk. As soon as it doesn't work, everyone in the pool could be electrocuted. I did have one person point out that they are using a surge protector, and thus it should trip the moment the outlets hit the water, but are you willing to trust your life to that? I've known too many surge protectors that didn't operate the way they were supposed to! When working out your own solutions, take the time to determine if it is a solution, or is it just an invitation for something worse.

I would love to hear what experiences you had with stupidly simple solutions that worked. Please comment below, and who knows, I might feature it in a future blog!
Posted by Matt Morey, PMP, DTM at 8:00:00 AM