Who Else Needs to Know?

Leaders have a tendency to hold things close to the chest. Get burned once or twice by opening your mouth and you soon learn to hold things close. I just mentioned Apple in my last post and I think I should again. Apple holds everything close to the chest. If you listen to the rumblings of the tech world, then you know about 6 months ago a developer left a version of the iPhone at a bar, by accident. When it was found, it made it's way to Gizmodo.com, who took it apart and wrote several reviews about it.

The unfortunate consequence of the lost phone was that the developer who lost the phone was fired, and the house of the editor of Gizmodo was suppossedly raided by police for "stolen property." Now THAT is CLOSE HOLD.

But... let's take a step back. Within Apple, while the development of the iPhone was happening, do you think that the developers, programmers and marketers all knew about the product? Don't you think that the people that needed to know about the product did? Honestly, every time Apple releases a new product, there is an army of people ready to support it; another army ready to sell it; and another army ready to market it. Knowledge transfers need to happen.

So every time you as a leader makes a decision, you should probably ask yourself who else needs to know...

An example from my past life: I just got back from Iraq the second time. I was working in the Operations office of the Division headquarters for only about a week. At that particular moment, I was the only officer present, when a Colonel came into the office, looked around and told me that a General would be landing at the helipad outside the headquarters tomorrow, then walked out. I wrote a note and left it on the desk of my boss, then headed home.

So what happend? The general was almost denied permission to land because local flight control didn't know he was coming; and the headquarters had to scramble to put together a reception for the general, rather than having nobody meet him at the helicopter. 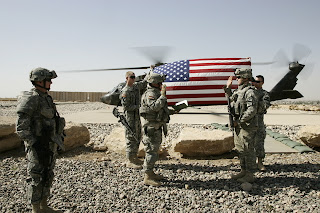 http://www.blackfive.net/main/2007/06/again_where_do_.html
Now in my defense, nobody ever told me what was expected of me if a helicopter was going to land... of course, I never asked either, so...

What this experience taught me was two fold. First, if you don't know, ASK. The second one is closer to the blog topic... ask yourself: "Who else needs to know?"

Leadership decisions have consequences. When a decision is made, take a moment to think about who else needs to know. If you need to push back a delivery date due to scope changes, it probably would be beneficial to tell your team before you tell the client. After all, what happens if your team looks lost and confused when the client asks for confirmation of the changed date? Yes it happened to me (I was the one looking lost)...

How about a decision that changes the behind the scenes settings of software? A decision was made that the owning Organization for a template would change. However, that decision wasn't passed to the team loading the template before it was loaded in one instance and replicated to 5 more. That one oversite created hours of work that could have been minutes.

So, next time a decision is made, take a look at the impacts and ask yourself "Who else needs to know?"
Posted by Matt Morey, PMP, DTM at 6:00:00 AM