This particular article is a little different than the one I intended. I was going to write something about New Years Resolutions (NYR), and how they almost give you permission to fail by calling them a NYR. Instead, I received an interesting LinkedIn message this week, and felt it was something worth sharing. After all, I write this blog to share my leadership experiences and the lessons learned. I would hate for people to think I'm avoiding topics.

The sender (on Christmas Day no less) sent a message intending to get under my skin and spit some venom. I was accused of being a joke and that people talked behind my back during a previous project several years ago. The message came from a person who I let go. It hurt to do it at the time (and hurts to see him still holding on to his anger several years later), as the person is a very likable person who was in over his head for the system design we were implementing and was slowing the rest of the team down because they had to correct or compensate for his work. He would make an excellent inspector or client representative, but detailed system specifications and designs were not his forte.

I never enjoy firing people, although I've been called upon to do it occasionally. I prefer to work with people to grow them and address issues. After all, if a person can improve then they become an asset, and you don't have to spend valuable time and resources trying to fill a void in the team. Sadly, not everyone makes the effort to grow (or can in the manner you need) and your job as leader is to solve problems and remove obstacles.

Back to the message. I honestly was surprised to see the message, not just because it came on Christmas Day, but also that it came from someone who hasn't interacted with me in years. Rather than ignore the message or respond with more venom, I decided it would be best to embrace the Christmas spirit, and hopefully help him resolve his anger.

My response to his venom was:


I'm sorry things worked out the way they did. You are a very likable guy, but perhaps not the right position for your talents. Merry Christmas and best of luck in the New Year.

Why am I sharing this to the public? Well, there are several lessons:

1. Part of your job as leader is to confront the problem and deal with them as best you can. You try to do the right thing for the team, but sometimes those have consequences which can come back years later. 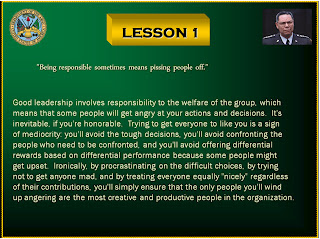 Leaders are responsible not only for their team, but the results of their team. Sometimes that means letting go of the team members who are slowing the team down. 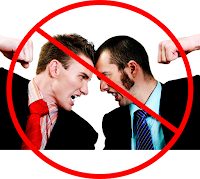 3. As the leader, when someone spits venom at you, don't return fire. Instead look for a way to be helpful, or address the issue. If you fire back all you are doing is dragging both of you into the mud. It may hurt when people you try to help decide that they need to let go of their hate, but that's why leaders have to be strong enough to take it. Remember, you're a tanker!

So, for the person who wrote me the Christmas Day message, I do wish you luck in the new year, and hope that you find some happiness. I know that I will continue to do what I can to help grow leaders and to address my own shortcomings in the coming year.  Odd, that this post and the last one are about people approaching me with issues because of my actions.  Perhaps I should look to see if this is one of my blind spots?

What do you think? How do you respond when people are spitting venom? Do you have a technique you would recommend? Let me know below and Happy New Year!
Posted by Matt Morey, PMP, DTM at 8:00:00 AM