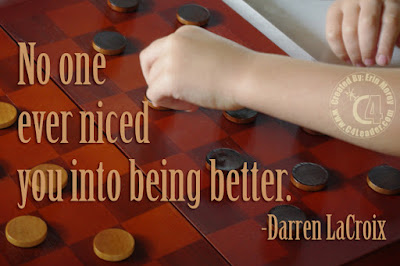 Several years ago I had an eye opening experience. I'd been speaking for a couple of years, and was recognized as a very strong speaker for the Toastmasters District I was competing in. I thought I was about as good as you can get.

Then one night, Darren LaCroix and Craig Valentine came to Houston and presented a workshop together. Both Darren and Craig are Toastmaster International World Champions of Public Speaking. In other words, they were world recognized "as good as you get."

During the workshop they invited volunteers to come on the stage and give a portion of their presentation. They would then stop you and provide feedback that was designed for immediate impact. After a little while, they would stop the presentation and then provide an evaluation. What you did well, where you could improve, etc., etc.

Towards the end of the workshop, my name was called. Up to this point I wasn't surprised by the feedback the previous participants had received and I was still feeling confident that someday I would be able to call myself "World Champion" as well.

I walked on stage, I was applauded, I started my speech: "Shh..."

I didn't even get the first complete syllable out of my mouth before they stopped me. To steal a bit from Darren: Ouch!

Apparently I had stepped on the applause, and started my speech before the audience was done. A minor no no, but one nobody else had done.

They let me restart, and stopped me very little, until about 3 minutes in. Then they said "That's it."

Craig then said something interesting: "We're going to do something a little different with Matt. He obviously knows what he is doing well, and you've all seen us compliment other people. For Matt, we are going to focus on what he can do to immediately improve and provide impact."

Craig and Darren then proceeded to work through my speech, asking me to repeat bits and phrases, show the body language, and the vocal variety as they picked the speech apart to build it back up. Apparently, not everyone was comfortable with this approach, because as the program continued, there were surprised noises coming from the audience.


At one point, people actually "oohed" as an audience of a sitcom often does when someone is treated unfairly or something bad happens:


Darren immediately spun toward the audience and said:

HEY, no one ever niced you into being better!

At the end of the session, my speech was immeasurably better, and my ego (albeit briefly) was significantly deflated. I learned what a true World Champion was like, and that I still had a lot of growth ahead of me; but his one line stuck with me, hence this week's quote of the week:

What are you sugar-coating for your team? What are you avoiding telling people because it is a difficult conversation?

Now, just because you aren't being nice doesn't mean you should be mean. If you are going to help your people, then you need to actually help them. Share not just where they can improve, but how they can improve. Provide real suggestions of actual actions they can perform to improve. Otherwise, your team will think you are petty. Tread lightly, but don't hide it. Leaders are not paid to avoid difficult conversations, but to have the difficult conversations. So remember:

No one ever niced you into being better.