So which type of Co-Worker are you? Over the next 8 weeks, I will post a cartoon each Wednesday with a different co-worker who is oh so much fun at work. Let me know what you think! 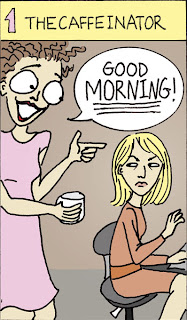 Really,the reason to show these pictures is because, as a leader, these are the people who surround you and you will have to interact with. As a leader, I hope you are none of these. If it strikes a little too close to home, then no fear. Just work to correct it. After all, nobody is perfect!
Posted by Matt Morey, PMP, DTM at 6:00:00 AM No comments:

Ten Things a Good Boss Does!

I found this list and felt it needed to be shared. Many times employees have a wish list for what the perfect boss would be. I found a list at TechRepublic.com that I think is pretty close:

1. Pay people what they are worth, not what you can get away with.

2. Take the time to share your experience and insights.

3. Tell it to employees straight, even when it’s bad news.

7. Encourage employees to hone their natural abilities and challenge them to overcome their issues.

9. Treat employees the way they deserve to be treated.

The list seems pretty self-explanatory, but if you want to read the whole article it’s here: http://blogs.techrepublic.com.com/10things/?p=1951&tag=main;banner

So what’s missing? I know that when I was the Divisions Night Shift Network Administrator, I tried to do most of these. Hey, when you’re in the Army, it’s a little hard to control pay, okay? But I did try to keep the majors and colonels (and sometimes generals) off my staff’s back so they could work. Most of the time my staff was smarter than I was at fixing specific network issues, so I delegate the responsibility of repair, rather than laying out a list of tasks for them to accomplish. As a final example I encouraged my staff to go for the various professional certifications. Those certifications would help with promotion points and if the person decided to leave the Army, he/she would be that much more marketable.

Good bosses (and thus leaders) are hard to come by. We all have experiences both good and bad. So what experiences do you have? Is there anything missing from the list?
Posted by Matt Morey, PMP, DTM at 11:02:00 AM No comments:

Standard Operating Procedures (or any other "Universal" Document)

After my first deployment I transitioned from an Armor Officer to a Signal Corps Officer. Shortly after my transition, our Commanding General decided that the division needed a Universal Standard Operating Procedure (SOP) across all the units within the division; from the Platoon level up to Division. From a viewpoint of a General, makes a lot of sense:
1. Now personnel could transition across similar units (not Armor to Signal Corps, but maybe Armor to Armor) and fit right in without a need for training.
2. New Personnel would also be able to learn quickly because there was an SOP within the Division that everyone adhered to
3. There would be a universal measuring stick for those units. How close did you stick to the SOP?

Sounds like a good idea. Now comes the "fun" part. The division created a chapter list that assigned "authors" could choose from to populate the SOP. Each chapter was already written from another Army Manual (Field Manuals, Technical Manuals, Tactical Manuals, etc). Also, the division decided the chapter list and order for each manual. It was up to the "authors" to pull the required information, place it in the proper place, and make any modifications as necessary. Guess who was an author? Anybody starting to see a problem?

Okay, to set the record straight, I like the idea of a SOP within a unit. It makes it easy to identify the expectations and how to handle situations. However, the execution of this one probably wasn't the most effective for the units involved. First, platoon leaders, company commanders, and battalion commanders were not involved in the chapter selection (either in the numbering or in which manual to use as the baseline). This means that people who haven't been in a platoon leader position for 15 years (if they were at all) were deciding what a platoon leader needed without his input. The other fun part of this was that the chapter selections were made largely by Combat Arms (CA) Officers (Infantry, Armor, Field Artillery); however a large number of units are not combat arms (Signal Corps, Quartermaster, etc). These units CANNOT operate the same way that a Combat Arms unit can. So the chapters were selected based on CA and passed out as if they applied to everyone.

Second, the selections didn't take into consideration any special jobs a unit might be regularly performing, like managing the divisions Communications backbone. There is only one Company that does that in the entire division, but their SOP looks the exact same as all the other Signal Corps units.

Third, there was no classes to explain what the new standards would look like, and no centralized governing body to ensure the standards were met. Once the chapters were released to the "authors," so long as the chapter numbering stayed the same, the author could cut and paste, delete or pull anything he/she wanted. All he had to do was pass his Battalion Commanders approval. Once that occurred they went off to be published.

Finally, this was done between deployments, when the units had a lot of training and retro-fits to complete in order to be combat ready for the next deployment. How much priority was given to these SOPs? Very little.

What was the end result? In my case, I tried to find ways to fit the information necessary into the chapters dictated. That meant I spent a lot of time rewriting things that probably never would have passed mustard if an Infantry guy got a hold of it. But what I wrote was what the Signal Corps Platoons and Companies needed. My book actually became the baseline for the 10th Mountain and 101st Airborne Divisions' own SOPs for their Signal Corps units.

However, for the most part the books looked pretty, but sat on shelves. I know of at least 3 Platoon Leaders (old Armor buddies) who wrote their own "Addendum's" to the SOPs and printed them out. These addendum's were handed out to their units, and the Division SOP was left on a shelf. Worse yet, when the Commanding General moved on, the SOPs were no longer published (except in a case by case basis).

So what is the lesson learned? First, involve the people impacted by the decision from the beginning. If representatives with more recent Platoon Leader and Company Commander experience were present. Also, people from across workstreams needed to be involved. When the only people making decisions are CA, then the only perspective is CA (in the business world, include the Engineers and Sales people in conversations, not just the Manufacturing people). Have this group set the original standards, then the books would be more relevant.

Second, have classes to the authors about what the expectations are. Make sure everybody is aware of the standards, and perhaps more importantly, keep people to those standards (including the graders). This should prevent massive rewrites and wasted time.

Third, educate the personnel receiving the documentation on what they are getting. Let them know what can and cannot be done with the documents, as well as the expected uses.

Fourth, allow the individual units add their own chapters at the end of the manual, so that the special  tasks and projects are included in the manual.

Finally, once the documentation is complete, let it sit in for a while (3-6 months), and then conduct a review. Are the documents being used? What changes would make them more effective? Should they be scrapped completely?

In the end, if these steps aren't conducted then you probably are wasting time. Before the SOPs were created, each Platoon Leader, Company Commander, and Battalion Commander was expected to create his/her own SOP, which meant setting their own standards and expectations. BECAUSE THEY WERE THE ONES WHO KNEW THEIR JOB.

For the most part, the best way to do that was to take the predecessor's manual and see what worked and what didn't. You keep what works and throw out what doesn't (even if you are in the position of rewriting the whole thing). Why would you do it that way? Because those standards are already known within your unit. Almost any leadership position in the Army changes out in 2 years. Could you accomplish anything if the standards in your job shifted every 2 years? How confused would your personnel be?

In Good To Great, Jim Collins talks about moving the grind stone, and how it takes a lot of effort to get it started, but less to keep it going once the momentum is built up. Standards are the same as the grind stone. Tweak them (change where the momentum is coming from), but don't stop the stone that is turning unless it is about to come off the access (and sometimes that happens).

For the most part, all of these steps comes down to communication. It is a 2-way street. Lots of managers have these great ideas about standards and then dictate them down to the masses. How effective is that (as you can see above)? Instead, communicate to your staff, get them involved in the standards setting and the metrics. Your standards will be more realistic and useful because of it.

I had just finished talking with a sales rep about updating some new specifications based on my previous experience with the client. This was a sales rep that worked for the same company as I, and we were both working with the client. By the time I got back to my desk, this picture was attached to an email: 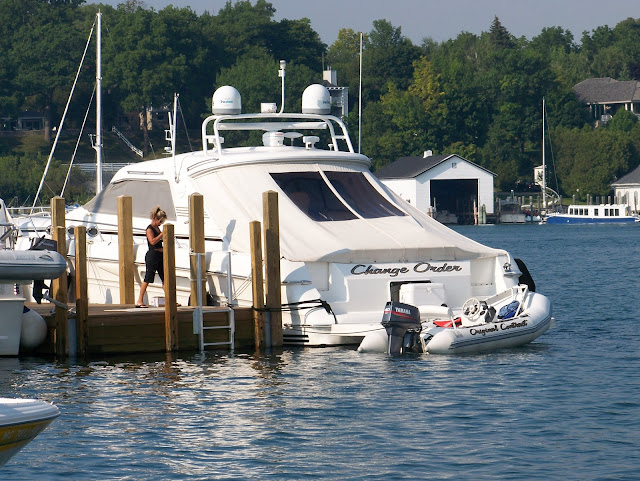 When you get a second, read the names of the boat and dingy. Well, at least the email was well understood...


But I have to ask the question, if you are the leader, do you want to leave problems you can fix to become Change Orders later, or do you include the solution in the Original Quote? Any thoughts?
Posted by Matt Morey, PMP, DTM at 8:00:00 AM No comments: