The First Thing They Want, and Why The Shouldn't Get It

How Much and How Long?

Never fails, the first thing management wants to know for any project are those two things: How Much and How Long. Whether you've been a Project Manager (PM) for a decade or a day, that question will come up, and typically sooner than it should, from the PM's point of view. So, when you are responsible for delivering a project, how do you address the question?

And as the project is more defined you widdle down the answer until you know enough about the project to give an almost definitive answer:

Barring any major change orders, this should take about 13 months and $4.6 million.

The wise leader will put in that qualifier so that when things do change (as they always will) he/she has a way of responding when management says:

I've shared a video before from the Star Trek Universe, and I've tried to avoid using too many of them. This one caught my attention, because I've been assessing next steps and areas of focus, and I realized it was the lesson so many of us could use. It's from Star Trek: The Next Generation, the episode is called Tapestry:

So often we want the finer things in life, but we are afraid to make the choices to move forward. We don't reach out and grab, but instead wait for something to fall into our lap. That way unfortunately means you are left hiding in the crowd.

What about you? Are you seizing opportunities? or are you playing it safe?

6 Reasons To Become a Project Manager

A little while ago I was asked how I ended up in Project Management and why did I want to be one. It started me thinking. Project Management is typically an accidental position/career (until recently with certifications and even college degrees offered in the profession). Project Managers (PMs) usually come from the technical side of the businesses. People who proved themselves as at least competent (if not more often exemplary) in a particular field (engineering, coding, design, architecture, etc.) find themselves "offered" the opportunity to lead a project because they've proven themselves to this point. "Offered" is in quotations because more often than not it is more order than offer. People are moved into the PM role, often with very little (if any) training, and expected to lead teams because they are considered smart and driven enough to do the jobs of nearly everyone on the project (at least at the smaller levels). This is rarely a good formula. Project Management requires a different skillset than being the technical expert, and without training and mentorship, people tend to fall back to the technical work they are comfortable with while the project suffers. Hence why I often think of Project Management as an accidental career.

A friend shared this video a while ago, and all I could think was: INSANE! If I tried any of this I would blow-out my knee, slip a disk, or have a heart attack. Good for him, but please don't try this at home! 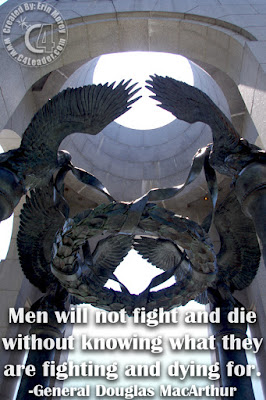 General MacArther was one of the heroes of World War II, specifically in the Pacific theater of operations. This quote may not be the most famous, but it is certainly true. If you want people to be motivated and inspired, to follow you with enthusiasm you have to start with WHY (A point Simon Sinek elaborated on in his book Start with Why, affiliate link). Otherwise, people will do what is right for them, and loyalty will not even be a consideration.

Whether leading men on the battlefield, or in a difficult project, or a small business, the WHY is what keeps the team together and focused. For many people, work is just a paycheck, and a better opportunity will "inspire" people to leave. And yet, many people will leave a solid job with a good paycheck to work long grueling hours at a startup for little money; because they believe in the WHY.

This picture is from the WWII memorial in Washington DC, the Eagles representing the United States, and the Olive Wreath supported by them a symbol of victory dating back to Ancient Greece. A fitting tribute to the veterans of WWII.

The Danger of "Chaos Mode"

A friend recently posted on Facebook that he was having a hard time with procrastination, and wanted to know who else struggled to get things done in a timely fashion rather than right up to the deadline. If this was asked in a live meeting I would sheepishly raise my hand. Add to this stimuli a new audiobook I've been listening to from Audible.com called Motivational Legends: Training Development and Character for Personal Success, and I've started to look at how I behave with a fresh set of eyes.

My readers know I claim to be a Project Management and Leadership expert, and that for the majority of my career since the military my work has been largely in project recovery. So much so, that I have a marketing company advising I call myself "America's Project Recovery Expert." In fact, when I get asked about what I do in Project Management I often respond with:

"Well, I've never started a project, and I've rarely finished one. I'm the guy you call when the project was set on fire and pushed off a cliff, but you still need to finish it." 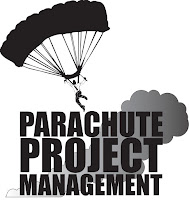 Rarely finish because too often, after I start making solid progress on a project, I'm called upon to hand-off the old disaster now under a semblance of control in order to deal with a new fireball somewhere else. Even before my civilian career I was often the disaster recovery guy in the military, handed the tough assignments which needed to be fixed RIGHT NOW, from communications blackouts to actual firefights. One of my more popular programs Parachute Project Management is based on these experiences and how to deal with them.

Two weeks ago Logan was released. It's a great movie, similar to some of the best western movies, but it is (supposedly) Hugh Jackman's last outing as Wolverine. With that in mind, auditions have started already for his replacement: 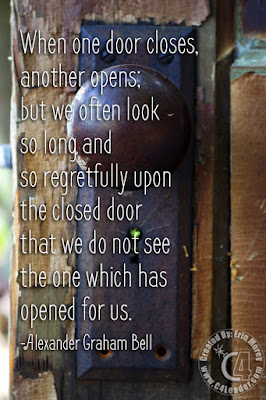 Have you missed opportunities? The timing wasn't right? The money wasn't there? You just couldn't make it work? Do you find yourself wondering "What If?"

That question can be poison: "What if?" You can very easily find yourself looking at a closed door with regret. Instead, ask "What have I learned?" and then look for the next door. Regrets and "what ifs" are murder to motivation and leadership. Get beyond it, because you cannot change the past; but learn from it so that you do not repeat it in the future.

What are you still holding on to? What lessons should you be incorporating into your life? These are the questions that one should reflect on, so that they can be prepared for when the next door opens. 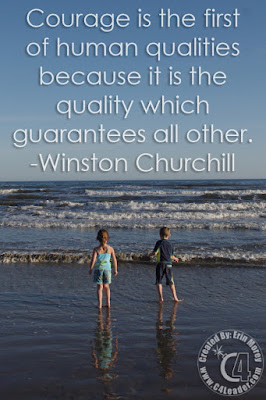 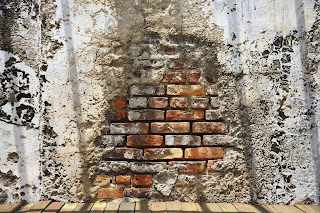 I thought I would share some images that remind me of a past life:

First up, not my life, but glad they didn't attempt airborne tankers when I was in. 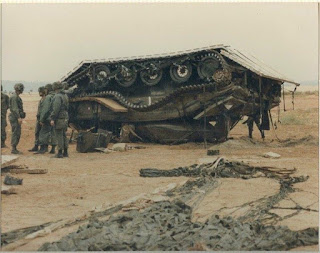 I think someone didn't clear their bore before sending the round down range... 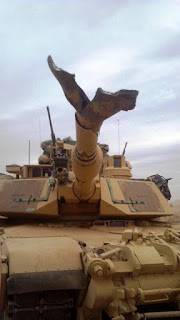 Kinda reminds me of this:

That isn't photoshop, there is nothing like the feel of a shockwave hitting your face during gunnery: 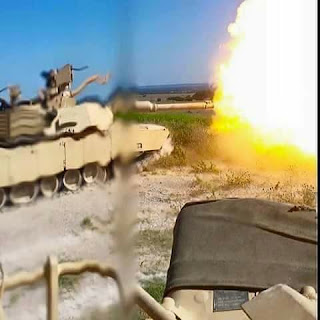 I love the smell of cordite in the morning... Smells like... Victory 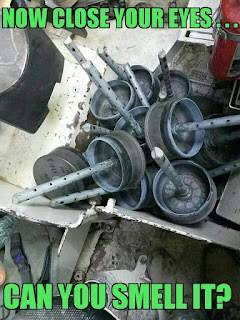