Rulers don't really exist today, but leaders do! And in today's business culture team members are smashed for every mistake. In fact, most companies are so afraid of risk that they only make incremental improvements rather than taking the bigger risk and trying something new. Why do you think so many start-ups supplant established businesses. Well, this is a fairly significant contributing factor!

How are you treating your team? Do you allow them the freedom to experiment, make mistakes, and learn or are you expecting perfection and punishing severely? Work with your team to grow, plan around the possibility of mistakes (risk management) and let the team grow. Don't drop the hammer the moment an error happens, but instead seek to learn from it. And if you must punish, do so in private, behind closed doors, rather than in public.

On the other side of this quote, reward quick, reward often, and reward in public. If a team member does a great job, acknowledge it. Goes above and beyond, provide a benefit. Saves the company millions or has a brilliant idea that makes millions? Reward them!

Too often we find the situation reversed. The hammer drops too quick and no matter the end result there is no reward. Fight the standard and help your team. By being slow to punish and quick to reward they will love you for it and work all the harder for you!


Ovidius Naso was a Roman author/poet at the time of Augustus from 43 BC to 18 AD and is one of three recognized canonical poets of Latin Literature. The crown is from the Fabrege collection, where the diamonds were a gift from Tsar Alexander I to Empress Josephine after her divorce from Napoleon, and the piece is one of the few tiaras made by Fabrege. 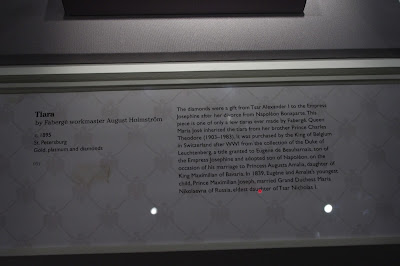