As many of my readers know, I have a list called Morey's Laws typically of Project Management, however I've been asked why they don't apply to Leadership in general. I couldn't provide an answer. So today, we meet the item at the end of the list: Don't Tempt Fate... It Can Always Get Worse. 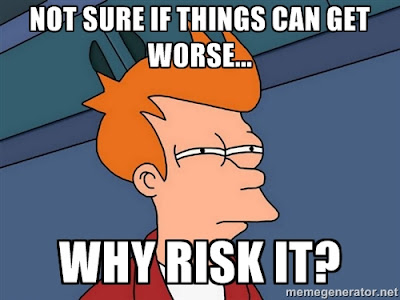 This is one of those laws that is meant to be a catch-all. Like in a bad (or sometimes really good) movie, a leader should know better than to say "It can't possibly get any worse" or some derivative thereof. It is almost always an invitation for fate to prove you wrong.

A couple of real life examples:


1. We just finished a COMSEC (Communication Security) encryption change over in Baghdad Iraq and surrounding areas. During the change over, we encountered 3 corrupted keys and 6 bad upload links. In one extreme outpost we had to send a helicopter out to a remote facility with a brand new encryption key because there were no locations close enough to provide the necessary files via convoy. What was supposed to take 6 hours took 14.

Just at the end of the cycle, as we were confirming a the last encryption key change over, my CW3 (Chief Warrant Officer, level 3) said: "Well, that couldn't have gone any worse." Within 15 minutes of his utterance, one of our major communication nodes went down. All links in and out were lost, and somehow it took the redundancy links with it! That meant that roughly a third of our communication outposts couldn't communicate back to the command post in Baghdad!

That very same CW3 who uttered those fateful words jumped a helicopter 30 minutes later to the site, and was there for another 8 hours bringing the system back online. It was days later before we knew what happened.

A bored Private was sitting in the communications hut, watching the pretty lights blink when he noticed that some of the exhaust / air circulation ports on the equipment had dust clogging them. Being industrious this Private unbent a paperclip and started to pluck or push the dust out of the holes. In one hole he met resistance, so he pushed harder. Well, the resistance was a resistor (I think) in a secure modem used to transfer information between communication nodes. When the modem failed, it caused a cascade that brought down all the connecting nodes because they couldn't close the loop. Each node could talk with each other on the other side of the blockage, but none could talk with the Division command post, leaving a Brigade without comms, because of a bored 19 year old with a paperclip!


2. While working as a Project Manager at a manufacturing facility, I was responsible for the first project from the facility to ever receive a specific stamp of certification. This meant a significant number of inspections throughout the manufacturing process, rather than only at the end. It also meant a constant presence of inspectors looking over the shoulders of workers who were only interested in cutting or welding steel, but cared little for exact measurements or temperatures. A mentality of "It works, so who cares!" existed in many of the workers.

During one particular period, the facility manager and I were interacting with an inspector who found lamination and roundness issues with several of our steel cans. In addition, he had concerns about our welders getting the steel up to (and maintaining) proper temperature during the weld. We finally settled him down with an inspection and recovery plan when it was my turn to utter the fateful words: "Well, I'm not sure what else could go wrong on this job." 2 hours later fate would provide the answer.

One portion of this project called for a window to be cut in the steel cans. The window dimensions had to be precise because there was another steel object that was to be fit into the window, and because of contrasting steels, as well as the stresses expected for that area, minimal filling was acceptable, and reheating was completely out of the question. Can you guess what happened?

That's right. The window was cut oversize. Not only that, but the welder had cut the window free hand, meaning the edges weren't straight or clean. He was working with the "It works, so who cares!" mentality. Guess who brought it to my attention? That's right, the inspector!

We had to develop a whole new welding specification to deal with the issue, develop a new process (in writing) on how the windows would be cut, and commit to extra testing of the steel at the areas of the window to ensure that the welds would hold under the stresses expected. That is a lot of extra expense and time wasted!


The lesson here is that as a Leader you should plan for the worst case scenario, and be prepared to execute recovery strategies before incidents happen. In an earlier Periscope, I mentioned that the Oil and Gas Industry uses a Risk Matrix and Risk Management meetings throughout most of their projects because the consequences can be disastrous. Look for an in-depth discussion on that topic in a future blog post.  However, no matter how well prepared you are, don't tempt fate and think you've seen the worse. Until the job is Complete fate always has an opportunity to prove you wrong!
Posted by Matt Morey, PMP, DTM at 8:30:00 AM