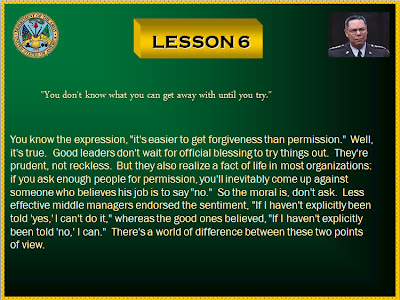 You don't know what you can get away with until you try.
I LOVE this one. I ran into it a lot in the Army.
I see this in a lot of different leaders. Some people use permission as a shield to hide behind, or are trained to execute only what they are told to do (like on Monday's entry). Others will decide upon a course of action and execute because they know it is needed, then will deal with the consequences.

It reminds me of a Quinten Tarantino movie called Inglorious Bastards. There is a scene at the end of the movie (spoiler alert) where 2 German soldiers were brought back across Allied lines. Brad Pitts' character pulls his side-arm and shoots one of them in the head. When the other German soldier screams "You'll be shot for this!" Brad's response is "Nah, I don't think so, more like chewed out. I've been chewed out before." Found here.

Okay, probably not the most PC example, and I would never condone the shooting of a prisoner of war (or for that matter, any other illegal activity). Those aren't the rules to play by. However, in this EXTREME example, you see a leader who is willing to do what he thinks is necessary, then ask forgiveness for his actions.

So, how do you treat your team in this regard? You can foster independence and innovation, or you can foster aggravation and a need to hunker down and "do what your told."  The choice is how you react when somebody comes to you for forgiveness (or permission).
Posted by Matt Morey, PMP, DTM at 6:00:00 AM