I don't know how many time this topic comes up. It sounds cliche, Lead By Example. What does it mean? Sometimes it means being with the team when the times are tough...

It was almost 1600 hours on a day that started at 0400 the calendar day before. Not a completely uncommon occurrence when you are a platoon leader in Iraq. The Brigade had just searched a town in Iraq outside of Baqubah which was the source for a regular mortar attack on 2 nearby Forward Operating Bases (FOBs). We were tankers who had been dismounted for over 12 hours, with a late night patrol the night before. Most of us slept last night, but not all (including yours truly)...

When we arrive at the new rally point (we shifted rally points when we moved to support another platoon's  house clearing) there was a problem. The vehicles for my men had arrived.... at the old rally point, 2 miles east of our current location, and they couldn't move to the new rally point due to a lack of security vehicles to escort them. If you know what a Charlie Foxtrot is, this about fits the definition.

My platoon was ordered to run across the town to the old rally point. Never mind that we just searched every house (and kicked in some doors), so locals would be upset. Never mind that my men have been on their feet more than 12 hours in body armor and helmets, with only about 30 lbs of gear each anyway. And never mind that the sun was starting to set, so visibility in the alleys and rooftops would either be shady or obscured by the low sun. Great idea!

So what does a leader do? With the rank I had, I could have stayed with the vehicles (I was the highest ranking guy on the ground, and could have claimed command of the convoy). That would mean that the platoon would make the run without me. Now, how demoralizing is that to your team? The leader bails when the going gets tough?

Well, like the old song, instead WE got going. I told the radio operator to inform the other rally point to hold all vehicles because we were coming across town. Then my 25 guys and I took off at a run (yes, my platoon grew for this one operation) across a town where we weren't exactly the guests of honor. It was quite possibly the longest run of my life. 2 miles in the mud, after being on my feet for more than 36 hours, with about 60 lbs of extra gear (30 lbs gear, ~30 lbs body armor/weapon), in fading light, while trying to keep 25 people moving as a cohesive unit so that we could support each other if the Charlie Foxtrot become a Mike Charlie Foxtrot. Ever see the movie Black Hawk Down?  That situation went from a Charlie Foxtrot to a Mike Charlie Foxtrot, and this one only needed a little nudge to get there.

Long story short, we made it to the old rally point (without the nudge, thankfully), where I was asked "what took you guys so long?" by a First Sergeant in a nice clean uniform who had spent the day back at base until it was time to release the pick-up convoy. And guess who it was that didn't send enough vehicles to the RIGHT rally point. Sometimes rank doesn't mean competent...

If you want to know about the whole day, send me an email and I may talk about most of it. Rather long drawn out story. So why share even part of it? Because when things went Charlie Foxtrot I was there with my men, visible and in the same mud as them. I LED BY EXAMPLE.

I talked about this once before, about being present when there is a problem. So why bring it up again? Because it needs to be said over and over. Because it isn't cliche.

But really it's because I was talking with somebody who reminded me about this incident and the outcome; and because it reminded me that it doesn't always need to be a Charlie Foxtrot situation. So what does this mean in the business world? If you got people working late on a project for you, stay late and help. If you have people on the shop floor cleaning up after a long day, go out with them and grab a broom (you only have to do it once in a while, I promise). Prove that you are willing to do what they are told to do. They will love you for it. 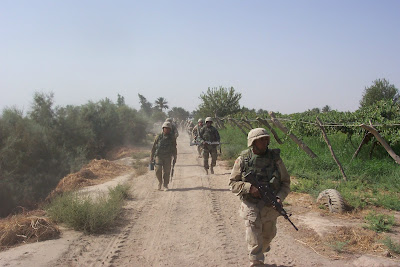